The Ávila National Park is located along the central stretch of the Cordillera de la Costa Mountains in northern Venezuela, forested mountains that surround Caracas, the capital of Venezuela. This park has a high diversity of fauna and flora, more than 100 butterfly species, approximately 120 mammal species, 20 amphibians, 30 reptiles and 500 bird species (36% of Venezuela avifauna) have been documented.  Nine bird species are endemic to Venezuela and three threatened bird species live in this park. In addition, more than 1,800 plant species from diverse taxonomic groups can be observed. Several of these plants are endemic to the Cordillera de la Costa mountain range with some endemic to the park itself. The Ávila can be classified as vulnerable because there is a risk that the diverse threats it faces will increasingly threaten its biodiversity, unless in the near future constant monitoring occurs.

The most immediate threats to the park, forest fires and illegal settlements, are located primarily near Caracas. However, the concentration of resources and vigilance in those areas closest to the city has resulted in more problems in the more isolated northern slope and eastern sector of El Ávila. These areas suffer from a lack of signs, infrastructure and vigilance.
This documentary reflects the coexistence between man and nature, in this case the national park with the city of Caracas.  What represent the Avila for Caracas?  the natural resources and landscape, and how these are affected by climatic changes and human unconsciousness not able to preserve its living resources. 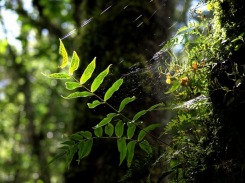